Ruler of Niflheim is the fourth main story quest of Chapter 2.

Use the "Expand" link on the right to read a spoiler-rich summary of this chapter's story. 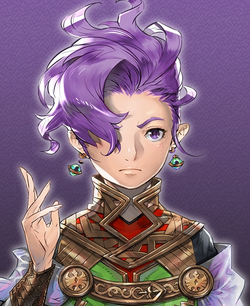 Muninn tells Odin how his lab in Niflheim has become a refuge for persecuted non-humans, and introduces him to Gulidova, a Vanir. Odin remarks upon how having a common enemy in the godslaying humans has made the divine races work more closely together with the goal of retaking Valhalla.

The group are planning to create soldiers immune to the Godslayer Spear out of the dead souls making their way to Niflheim. They liken them to Einherjar and Odin protests, saying that only a Valkyrie could deem someone worthy of that honor. In response to that, they show Odin that they have the body of Woglinde, calling it a gift from Sephiroth. They are attempting to turn her into a Valkyrie. Odin refuses to help them, saying that even if he had the strength, he believes it is immoral to turn those souls into Einherjar.

Meanwhile in the outside world, an elf gives Aurora a map from her brother that leads to Niflheim, calling it a safe place to go. Lumille and Lloyd catch up to her, and Aurora takes control of Lumille, using her to attack Lloyd. He uses forbidden water magic against them, citing emergency procedure.

Odin and Gulidova argue about the new world - Odin says that it is what Lenneth wanted and seems content with the fall of the gods, but Gulidova loathes it, seeking what she feels is her rightful place above humans. Odin says he is leaving, and advises them to give up on the valkyrie idea. Muninn, furious, proclaims that as king of Niflheim, he will destroy Midgard, reclaim Asgard, rebuild Valhalla, and become the "new Odin."

Aurora and Lumille fall through the ground thanks to Lloyd's spell, and Lumille's leg is injured. Despite technically being on opposing sides, they share friendly words and Aurora heals Lumille's leg. Aurora iterates that she doesn't want to fight. Lumille saves them from bears in the cave, since Aurora's powers don't work on animals. Lumille lets Aurora go when they're out of the cave, and Lloyd scolds her for it when he finds out. Lumille has misgivings about their mission, stressing that they themselves are no different from the ones they're hunting, being half-breeds.

In the final scene, the alchemist Olve laments his current failures in experiments. It seems that his goal, too, is to create a valkyrie.

Ruler of Niflheim
Retrieved from "https://valkyrie-anatomia.fandom.com/wiki/Ruler_of_Niflheim?oldid=28894"
Community content is available under CC-BY-SA unless otherwise noted.