This information was added based on the Global version of the game. It requires verification for the Japanese version, which is a sitewide work in progress.

Since the Global version has shut down, you will need to play the Japanese version of the game if you want to play it. For details on how to install it, see Japanese Version Installation.

It may be boring, but start with clearing the tutorial, Valkyrie's Awakening. It will explain Battle basics and the quest/exploration part of the game.

There is a 'Data Reset' feature in the game which can help you to get a strong start. Basically, you can restart game from the very beginning without redownloading the game. This will allow you to reroll the first free gacha pulls to get the best character available at the time.

You have a free tutorial gacha pull at the beginning. It's from this tutorial banner:

Every new player gets a pull of 11 weapons from it. One of them will be a guaranteed artifact. Artifacts in this game are the main way to get new characters outside of the Main Story. You get an artifact and offer it to Odin. This unlocks the side story quest to recruit the character related to this artifact (you can read about the process in detail on the Artifacts page). The list of available weapons and artifacts in the tutorial gacha improves with time, but it's hidden by the game, so no one knows about the current full list. Most of the characters from the gacha are better than free characters, but - as usual - some are better than others.

Good pulls on this banner will include 2-3 gold 6-star weapons.

If you get an artifact there will be a character image behind it during the pull, like this one: 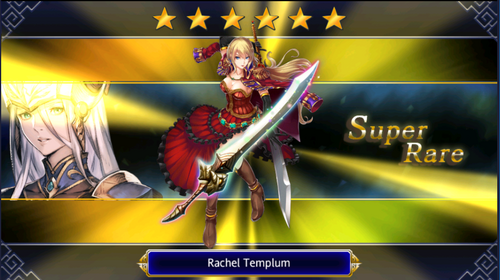 Go back to the 'Top' screen. Confirm all pop-ups and then return to the 'Top' again. This time you need to tap on the medal icon on the left side of the screen. It opens the mission/achievement screen. Tap on 'Grand Missions' at the top and then on the only completed mission. After this check the gift box and be sure to take everything from it.

If you weren't lucky during these pulls, you can try to play the main story, get some gems and pull on current event banners, but it's very time-consuming, so trying additional pulls before rerolling is usually not worth it.

If you decide to restart your game return to the 'Top' screen, choose 'Settings' and scroll down to 'Data Reset'. Be sure you have NOT saved your progress via 'Back-up'. Also don't forget there is no way to restore your account if you use the 'Data Reset' function.

After you get your best rerolled account use back up to save it so you can restore data if you switch devices or encounter technical problems later. 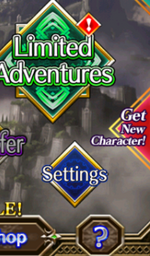 At this point you have at least two artifacts, so it's time to get the characters from them. The easiest way is to click on the red triangle button on the 'Top' screen (another way is to get into 'Equipment' -> 'Item List' -> 'Examine/Tribute Artifacts'). You will see list of all artifacts you have. Choose one of them and then 'Tribute' it to Odin. You will lose the artifact after this (don't worry, they are really bad as weapons). The game will inform you there is a new quest available. Agree to start it. Complete the stages (there is only one in most cases, but can be up to ten) to get the new character for your party. Don't forget to 'Edit Party' to take the new character(s) with you and equip them with weapons from your previous gacha pulls.

Now you should have several shiny new heroes and weapons to begin your adventure in the game. There are a lot of ways to do so, but it's better to start with the Main Story. Just choose it from the 'Top' screen and then any of the available 'Cadences'.

Enjoy the story and get to know your first story characters. You will recruit Sennah and Lucia from these stages. Continue until you at least finish the Goddess of Fate storyline.

This game tends to have a lot of events going at the same time. They are usually time-limited and grindy and you will need some time to get used to their pace. It's up to you whether to enjoy the main story first or to try to snatch something useful from the events.

Still, at least try to do the daily Descension Boss - you have three attempts each day to beat it. Save the drops to enhance your best characters with via their Character Potential Boards.

Usually it's better to choose events by how many days are left until their end, but the last stages of the events are tailored to be a challenge for strong top players so do not waste AP on them while you don't have the power. If you see there is not much event currency dropping, it's better to skip the event.

It's nearly impossible to empty event exchange booths in most cases, so the main thing about event is to decide what you will grind for and when to stop bothering with attempts to get more. Of course, new characters and new high-rarity weapons are on the top of the list, especially at the beginning while you don't have many of either.

If you're stuck and can't complete some missions you can go and level up and get stronger and all, but there are some tricks to pass such stages a bit faster:

Retrieved from "https://valkyrie-anatomia.fandom.com/wiki/Getting_Started?oldid=29741"
Community content is available under CC-BY-SA unless otherwise noted.