Enchant Skills are a type of skill that can be granted to any character and used in battle. Some gacha characters come pre-equipped with an Enchant Skill, but they can be overwritten if you would prefer for them to use another.

Enchant skills can be leveled up to a max level of 5 to increase their power by using Gold Scrolls, Silver Scrolls, or Bronze Scrolls, depending on the particular skill.

To use an Enchant skill, flick right on a character's portrait during battle if they have an enchant skill equipped.

How to Grant an Enchant Skill to a Character Edit

As mentioned above, some characters come with Enchant Skills pre-equipped. If this is the case, it will be shown on their character page here on the wiki, and can be overwritten if desired. To overwrite one of these skills or grant one to a character that doesn't have one, you will need a weapon that has the specific Enchant Skill you want to give the character. This will be either a gacha weapon or a weapon whose name begins with 'ESword:' (obtainable from events) and the Enchant Skill will be marked on the weapon with one of these icons:

Open the character's Potential Board.and look for the area marked Enchant, as shown below: 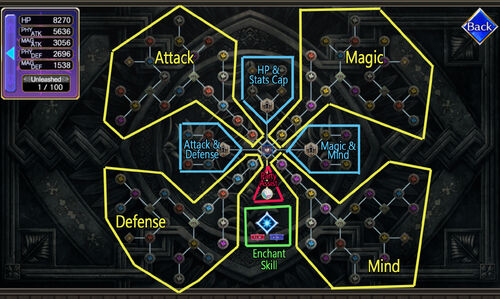 Select Enchant, and then select the weapon you want to use to Enchant the character. The weapon will be consumed so be careful which ones you use! If you level up the skill on the weapon before using it on a character, the character will gain the higher-level version of the skill instead of needing to use scrolls to level it up later. This can be useful if you have a lot of ESwords of the same type from events.

Follow the prompts and confirm that you want to Enchant the character, and then the weapon will be consumed and the character will be able to use the skill in battle from then on.

How to Level Up an Enchant Skill Edit

Enchant Skills come at level 1 by default, but can be leveled up to level 5 for a boost in power. You do this by going to the same location on the character's potential board and selecting the Lv up option that has appeared. You can then use Gold, Silver, or Bronze Scrolls (depending on the type of Enchant Skill) or a weapon with a higher-level version of the Enchant Skill to level it up by selecting which you want to use and then following the prompts. As with Enchanting characters initially, using a weapon will consume it. Scrolls are obtained from event quests and exchanges.

Each subsequent level costs more scrolls to level up, so the weapon-synthesis method mentioned in the How to Grant an Enchant Skill to a Character can help save scrolls in the long run.

Retrieved from "https://valkyrie-anatomia.fandom.com/wiki/Enchant_Skills?oldid=29938"
Community content is available under CC-BY-SA unless otherwise noted.