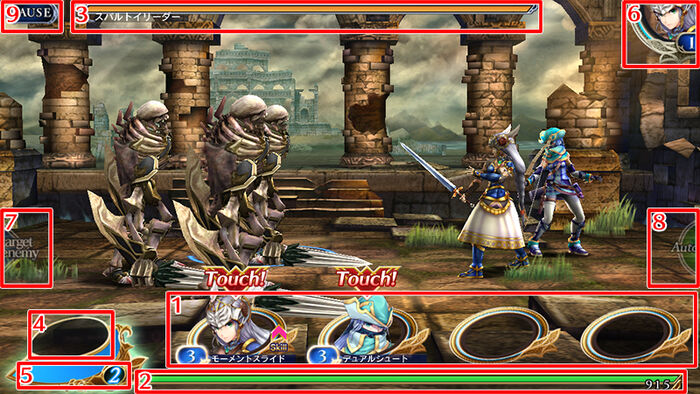 This shows all characters participating in the battle. Tapping the icons performs a normal attack.

Total party HP. Unlike most games, the party's HP is treated as a pool. Rather than a single character dying when their HP reaches zero, all characters will die if the party HP gauge reaches zero.

If a buff, debuff, or status effect is applied to the enemy, it is displayed to the right of their HP gauge.

The total number of hits in the current combo.

The purification gauge rises as you attack. When it fills up, the number in the lower right (amount of purification attacks available) will increase by one.

The icon of your friend's favorite character, whose skills you can use in battle. Alternatively, this can be your own character, if you have your support slot placed somewhere in the main party.

7. Target Enemies You can change your target at any point in battle. Your current target will have a blue ring of light beneath them.

You can toggle auto battle by selecting this button. In this mode, characters will not used skill/purification to attack. If you are currently under the effects of the Premium System, you can autobattle at up to 3x speed and can set it to overattack during auto battling.

All attacks are one of three types:

An attack's element is determined as follows:

When guarding, damage taken is reduced by half. You can guard against both physical and magical attacks. A character's guard rate determines how often this will randomly occur - you have no control over when it happens. If you keep attacking a guarding enemy you can break their guard, or you can stop attacking for a few seconds to make them lower their guard. In that case, you may lose your combo.

The purification gauge rises as you attack. It will gradually lower if you are not attacking during your turn, and returns to zero at the end of each battle. When it fills up, the number in the lower right (amount of purification attacks available) will increase by one. This gauge can go up to four attacks - they will always be used at once, so you cannot save a portion of them for another turn. Using a purification attack will return the gauge to zero.

Overkill is damage that exceeds the enemy's HP, indicated by the red area of their HP gauge after death. Crystals that appear while overkill are more effective than usual, so it pays off to use the rest of your characters' attacks on the last enemy of the battle.

The combo number rises with each hit, and will reset with inaction. Crystal generation increases as the combo count rises.

XP and treasure crystals will increase the amount of experience or gold gained after battle. Attacking a launched enemy produces XP crystals, and attacking downed enemies produces treasure crystals. Crystals appearing while overattacking an enemy have a larger effect than usual.

Every weapon has an action skill. Some can be used multiple times, as shown by the number of pink chevrons on the right-hand side of a character's portrait. You can also use a friend's action skill.

You can select a backup player before beginning each battle. If you are friends with a player, you can use their action skill more often. Filling the heart beside their name on the friends list will make them appear on your list more often.

There are five elements:

Poison
Poison causes damage at the end of each turn.

Freeze
While frozen, your number of attacks is reduced by half.

Paralyze
While paralyzed, normal attacks and weapon skills have a 50% chance to fail.

Curse
While cursed, normal attacks and action skills will damage you by a fixed amount.

Petrify
While petrified, you cannot attack, use action skills, or guard.

Seal
While sealed, you cannot use action skills.

You can recover from status effects by:

Buffs and debuffs can be removed:

You can tap the auto battle button to automatically battle. Auto battle will not activate your support character's skills or purification attacks. You cannot manually use weapon action skills while auto battling, though you can use your friend's skills. Auto battle is generally only recommended when you are overpowered for the area, as the AI used for it is not the smartest.

Retiring will result in losing the treasure chests you accumulated, but any XP and gold you won will be kept.

Retrieved from "https://valkyrie-anatomia.fandom.com/wiki/Battle?oldid=22276"
Community content is available under CC-BY-SA unless otherwise noted.